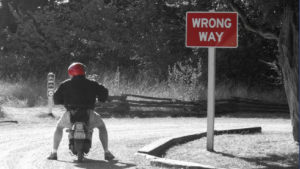 Sunday (11/20/16), we looked at the interaction between the Jewish people and Pilate just before Jesus’ trial and crucifixion.  We sought to answer this…

Big Picture Question:  How is our sin foolish?

And we looked at these verses.

John 18:28 Then they led Jesus from the house of Caiaphas to the governor’s headquarters. It was early morning. They themselves did not enter the governor’s headquarters, so that they would not be defiled, but could eat the Passover. 29 So Pilate went outside to them and said, “What accusation do you bring against this man?” 30 They answered him, “If this man were not doing evil, we would not have delivered him over to you.” 31 Pilate said to them, “Take him yourselves and judge him by your own law.” The Jews said to him, “It is not lawful for us to put anyone to death.” 32 This was to fulfill the word that Jesus had spoken to show by what kind of death he was going to die.

To answer our Big Picture Question, we answered it in this way.

Big Picture Question:  How is our sin foolish?

Let’s look at our first point.  Sin is foolish because of the…

Amazing.  The Jewish people want Pilate to execute Jesus, but they won’t enter his home.  Why?  Because entering this Gentile’s home would make them ceremonially unclean.  If they are ceremonially unclean, they can’t take part in the Passover celebration.  The Jewish people are so concerned with looking good they don’t recognize their sin.  They want Pilate to execute Jesus, their Savior.  They are trying to look good and religious at the same time.  Sin is like that; our sin is like that.  We try so hard to still look good even when we are sinning.  How foolish.  But in addition to sin’s desperation to look good, sin is also full of…

29 So Pilate went outside to them and said, “What accusation do you bring against this man?” 30 They answered him, “If this man were not doing evil, we would not have delivered him over to you.”

Pilate asks the Jewish people what accusation they have against Jesus that would merit His execution.  And how do the react?  They get mad.  They are offended that He would even ask.  They are angry.  The sin in our heart often causes us to react that way.  Look in scripture.

In the Garden of Eden, God created an environment of harmony and love in relationship with Him.  All that was withhold from Adam and Eve was something exclusive to God:  the knowledge of good and evil.  But man, in his anger, said, “You cannot withhold anything from me (a baseless accusation against the creator of the world)”.  When God rescued the children of God from Egypt and then they actually began their travel to the Promised Land, they got mad and said, “We would have better off as slaves.” (a silly baseless angry accusation).  When Moses got mad, he struck the rock in disobedience.  When Peter got mad, he rebuked Jesus telling Him that the plan for Him to die was wrong.  Sin is about baseless anger against God.

And friends, we are not immune to this.  Why should we be immune to the baseless anger of our sin when some of the godliest people, the heroes of our faith, weren’t immune to it?  When you don’t get what you want or you get mad at your spouse or your boss, you sin and you justify to God by continuing to sin.  And when Pilate asked these folks why they wanted Jesus to die, they got mad, and said, “We wouldn’t have brought him to you if He hadn’t done what was evil.

Friends, we must realize that our sin is rooted in baseless anger with something and ultimately, it is always anger with God.

And finally, not only is our sin desperate to look good and full of baseless anger, our sin is irrational.

31 Pilate said to them, “Take him yourselves and judge him by your own law.” The Jews said to him, “It is not lawful for us to put anyone to death.” 32 This was to fulfill the word that Jesus had spoken to show by what kind of death he was going to die.

Even this Pagan governor knows this is a sham.  He can’t find anything that Jesus has done, much less anything that He has done to deserve death.  He says, “Take Him back.  You obviously have some law that you think He has broken.  You judge Him.”  Sin is so foolish that even pagan Roman governors know that the death of Jesus is unjust.

But no, the Jews won’t have any of this.  They say, “It is against God’s law for us to put someone to death.  So, since we can’t kill Him, you kill Him” – as if that is okay.  That is completely irrational.   But, God used it all, even this irrational behavior to fulfill the promise of how Jesus was to die.

Guys, our sin is so irrational.  We justify it.  We look at the damage it does.  We look at the consequences, and we sin anyway.  We assume because nobody knows about your sin, that it really isn’t affecting anyone anyway or you justify a reason why it’s okay not to deal with your sin.

We closed with these things.

Truth:  Our sin if foolish because it is angry, irrational and desperate to look good.

Application:  Live knowing the dangers of your sin are not only met but exceeded by the glories and abundance of God’s grace.

Action:  Apply Jesus’ goodness when we try to look good.  Walk in humility instead of anger.  Know and obey the scriptures instead of living in the irrationality of sin.

And we ended with this hope.

Romans 5: 18 Therefore, as one trespass led to condemnation for all men, so one act of righteousness leads to justification and life for all men. 19 For as by the one man’s disobedience the many were made sinners, so by the one man’s obedience the many will be made righteous. 20 Now the law came in to increase the trespass, but where sin increased, grace abounded all the more, 21 so that, as sin reigned in death, grace also might reign through righteousness leading to eternal life through Jesus Christ our Lord.

If you want to listen to this sermon, check out our sermon page.