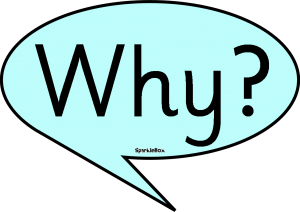 We found these answers to that question:

Big Idea:  Why did Jesus die?

To Show the World God’s Justice

John 19:1 Then Pilate took Jesus and flogged him. 2 And the soldiers twisted together a crown of thorns and put it on his head and arrayed him in a purple robe. 3 They came up to him, saying, “Hail, King of the Jews!” and struck him with their hands. 4 Pilate went out again and said to them, “See, I am bringing him out to you that you may know that I find no guilt in him.” 5 So Jesus came out, wearing the crown of thorns and the purple robe. Pilate said to them, “Behold the man!”

Pilate doesn’t find any fault in Jesus at all.  But the crowd demands that Jesus die.  So, Pilate had Jesus beaten and presented for crucifixion.  This is worldly, self-preserving justice.  The death of Jesus presents to the world how our justice can be so misguided, yet it also causes our heart to cry out for the true justice of God.

To Show the Foolishness of Sin

6 When the chief priests and the officers saw him, they cried out, “Crucify him, crucify him!” Pilate said to them, “Take him yourselves and crucify him, for I find no guilt in him.” 7 The Jews answered him, “We have a law, and according to that law he ought to die because he has made himself the Son of God.”

The Jews want Jesus to die because they feel He violated Leviticus 24 which says that anyone who misuses the name of God should die.  How foolish.  They cried for a Savior.  He showed up.  Declared himself their Savior, and they wanted Him to die.  Sin is so foolish, and the death of Jesus demonstrates that.

To Show the World God’s Authority

8 When Pilate heard this statement, he was even more afraid. 9 He entered his headquarters again and said to Jesus, “Where are you from?” But Jesus gave him no answer. 10 So Pilate said to him, “You will not speak to me? Do you not know that I have authority to release you and authority to crucify you?” 11 Jesus answered him, “You would have no authority over me at all unless it had been given you from above. Therefore he who delivered me over to you has the greater sin.”

Pilate throws around his authority to intimidate Jesus.  Jesus teaches Pilate that the only authority he has comes from God the Father.  Pilate is guilty of handing Jesus over to death, and in the trial and execution, we see God’s real authority:  authority over all life, authority over all earthly-authority, and authority even over death.

Truth:  Jesus had to die so that world would see God’s authoritative justice against the foolishness of sin.

Action:  Die to your wants/rights in some way this week in order to serve another and proclaim the love of Jesus.